If you have a backdoor password to enter your PC BIOS, this user guide can help you.

Try the basic passwords “BIOS”, “CMOS” and just “PASSWORD”. If they can’t find the BIOS, try using the BIOS manufacturer’s private data: work with Phoenix and PHOENIX to get the Phoenix BIOS; “AAAMMMIII”, “AMI? SW” combined with “A.M.I.” for AMI; and “AWARD PW”, “AWARD SW” and “AWKWARD” for Award BIOS.

It’s not uncommon for you to probably forget the password to enter the BIOS of your main laptop and PC. As long as you don’t want to change the basic I/O settings on your computer, you’re fine with that. However, some tasks, such as changing the boot order, will require buyers to enter the BIOS if they do not want to go through the tedious process of resetting this data (very difficult for a laptop compared to a personal PC). computer), you can use backdoor information discovered by the providers of basic input/output systems themselves. Here I have a selection of BIOS backdoor passwords that canhelp you regain easy access.

If you choose to use manufacturer login/logout backdoor passwords for base system mobile computers, the issue of recording your laptop’s variant number is of great importance. Dell laptop example: You may have different BIOS bypass passwords for different Dell laptop models. The same goes for laptops from HP, Toshiba, etc. For an up-to-date collection of the latest models of computers connected to the Internet, I recommend that you contact their respective technical support.

Here is a catalog of the latest registered Core I/O System backdoors for AMI.

Here is your own set of working passwords for the basic job login/logout system.

In rare cases, none of these access passwords work and you may need to explore other methods to bypass the BIOS password. Some alternative BIOS backdoor password methods are listed in another guide. Click the link below to read this guide.
A Complete Guide to Resetting a Customized BIOS

The second way to get around the location of the lost BIOS password is to simply shut down the system and remove the battery that powers the RAM, which undoubtedly contains the BIOS settings. After losing the configurations, simply replace the power supply and reboot the computer by resetting the appropriate BIOS settings in CMOS.

Is there a default bios password? Most computers may not have BIOS passwords because this feature must be manually enabled by someone else. LargeModern BIOS systems allow users to set an administrator password, which also simply restricts access to the BIOS utility itself, but allows Windows to boot. …

Remember that what you think is cheap may not match your BIOS password. This BIOS password can have the same checksum as someone’s real BIOS backdoor password. For the Award BIOS, this checksum is stored as
F000:EC60.
Resetting part of the BIOS password using software

The BIOS password is important authentication information that sometimes needs to be enabled in the computer’s BIOS (basic I/O course of action) before the computer boots. The BIOS is a program used by the host computer’s microprocessor to control the initial boot sequence and hardware initialization.

You can write your own program to read the BIOS password from CMOS
memory on a larger PC by writing the address after the CMOS byte you want to read with. You open 0x370, then play content using port 0x371.

! The BIOS recovers the BIOS password for most major BIOS versions,
including IBM, American Megatrends Inc, Award, and Phoenix.

CmosPwd rolls back BIOS changes for the following versions:

How do I unlock BIOS settings?

From the Windows Start menu, select the power icon.Hold down the Shift key and also select Restart.When the Choose an effective option screen appears, select Troubleshoot.Select “UEFI” i.e. Firmware settings.Select “Restart”The device will boot up and boot into the BIOS. 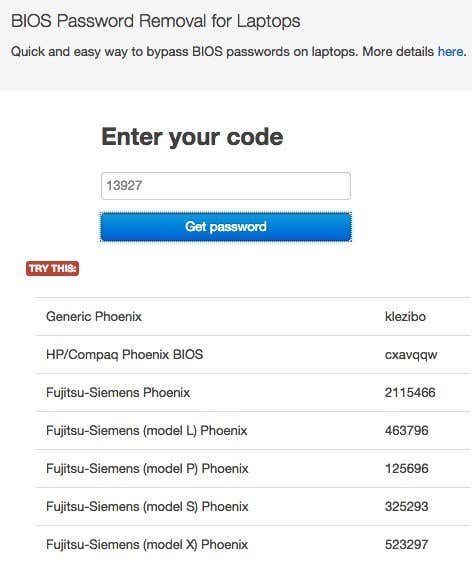 Help us help you: where are you? you knowChichok or the best computer guru? Provide us with a detailed procedure specification (use Aida32 or Belarc Advisor)

How Do I Fix Quadgt X38 BIOS Issues?

How To Deal With The Error “You Need To Format The Disk”?